RDSEA measures large or small-scale-ocean atmosphere interactions, mixed layer dynamics and ocean circulation. With a variety of data loggers and transmitters to choose from within our quiver of components, based on project specifics, we can record internally and transmit externally environmental parameters directly to your facility server for further post processing. Listed below are examples of the basic Physical, Chemical and Biological measurements collected today: 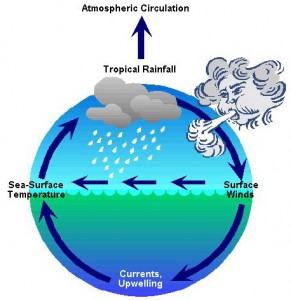 Ocean measurements have come a long way since first recording the basic physics of water column density and currents only. Technology has altered and advanced the manner in which we measure, record and transmit the above mentioned parameters. Eliminating “cables” and “moving parts” is a goal of many groups in today’s era of offshore sampling, both top-side and subsurface. The process of “induction” (Inductively Coupled Moorings) has just about terminated the need for cabling sensors on mooring lines, usually the first weak-link contributing to data loss. Inductive modem technology allows a signal from deployed instrumentation to be transferred to the mooring (steel cable inside a plastic jacket) and sent up to the surface to an on-board buoy controller for processing. Doppler technology continues to evolve with now centimeter bin-size resolution allowing for a more fine-tuned breakdown of water column velocity and direction along with longer and deeper range vs. decreased power consumption. Acoustic modems also now play a major role in receiving data from the seafloor, continuing the “no cables” protocol.

Wind measurements can now be made via Doppler shift calculations and time of travel (sonic) vs. revolutions/second from a propeller connected to a compass and vane with bearings that wear out within a few months after deployment (some sonic wind sensors hold a calibration up to five-years). Optical sensors with highly sensitive lenses now have “wipers” or shutters, allowing for clean sampling of chemical measurements, (sensor wakes up, shutter opens, measurement is taken, shutter closes) the system then goes back to sleep until the next sample is taken. This allows long-term optical sensor deployments in heavy bio-fouled environments without constant maintenance and cleaning (ships, boats and divers), cutting program costs substantially.

Telemetry options are constantly changing but the basics are still in place. Sending data back to the beach from near-shore environments, we can take advantage of “line-of-site” radio frequency (RF) transmitters. Wi-Fi is now being used with success with distance between nodes the limiting factors (short distances) and of course cellular technology is available along our coastlines, again with limitations to distance offshore. In the remote areas of the oceans: Iridium (over 60 satellites covering our planet, no site is untouched), GOES (Geostationary Orbiting Environmental Satellites) and the ARGOS Network (Polar Orbiting) are the main systems of choice with costs continuing to lower as system requirements increase.